How To "Steep" A Pot of Tea 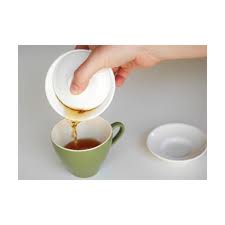 There are many ways to steep loose leaf tea these days, thanks to many modern innovations, and some are good, while others- not so good.

Before the invention of English teapots, tea balls, tea strainers, and teapot infusers,  there was the Chinese gaiwan [guh- wane], given to us by the Qing Dynasty.  A gaiwan is a lidded bowl that rests on a saucer; it steeps and serves the tea - its an ancient multitasking  tea steeping wonder.   After the tea has been steeped, the lid is held offset by the pourer's thumb to prevent the tea leaves from falling into the teacup, as seen in the picture to the left.  The gaiwan is a classic and stunning example of simple and beautiful design.  The gaiwan is traditionally used to brew white, green, and recently - oolong teas.  I have never personally used one, nor have I sampled tea brewed in one, but it looks easy enough to do.

Not only are there many ways to steep tea, but there are also many different varieties of tea, all of which require slightly different steeping times and water temperatures:

Black tea usually requires anywhere from 3 to 5 minutes and boiling water 212F
Oolong is usually steeped 2 to 3 minutes, with water that is simmering 190F
Green tea and white tea require no more than 1 to 2 minutes, white tea being the most
delicate needing the lesser amount of time.  Also the water temperature is at
nearly a simmer 180F, some may prefer water temperatures as low as 150-160F .

But these are only guidelines, not hard and fast rules, because people even argue about the temperature at which water simmers, much less the amount of steeping time for each kind of tea.  There are many variables to consider, more than the average person cares to imagine, so the tea drinker (through experience) learns what temperature of water and amount of time is needed to steep the perfect cup of tea that suits their taste.  As for me, I like my black tea steeped in water at a raging boil, no more than 2 minutes, any longer and I find it is very bitter for my taste.