Reason 1: The crooked, extended pinkie, dates back to the 11th century Crusaders and the courtly etiquette within knighthood. The practice of eating with three fingers was considered to be cultured, by ancient Roman standards, while commoners ate with all five fingers.  Historically speaking- eating with flatware (forks mostly) is a fairly new custom.  This etiquette rule applies to food, and this rule, is still used and considered to be proper, when handling finger foods, such as hors d oeuvres, even in the 21st century.  Apparently, this practice was at some point in time, applied to drinking tea.


Reason 2: Anne Boleyn, wife of King Henry VIII, had six fingers, so her extra finger made it necessary for Queen Anne to extend her pinkie when she drank from a teacup.  Thus, if you supported your King and Queen, then you did as they did.  I don't know if this is true, but it sounds plausible.


Reason 3: The common class performed this gesture as an affectation, or as a way of being "high class".  To be more clear, this was done by some to intentionally mock the "upper crust."  But this social affront was mimicked by souls with good intentions, whom undoubtedly misunderstood the mockery, thinking it was indeed high class to raise their pinkie while drinking tea.


Reason 4: The early tea cups were styled after the Chinese type sipping cups, without handles, so the way the cup is held dictates that you have to extend your pinkie as you sip to maintain balance, to avoid burning your fingers.  I don't know about this one, as I've seen Chinese people drink from this cup without extending their pinkie.

The Proper Way to Hold a Teacup and Saucer 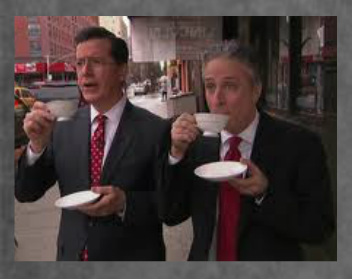 Jon Stewart  may not be Politically Correct, but at least he and his cohort, Stephan Colbert, are holding their teacups and saucers correctly.  Observe how Stephan pinches the handle with his thumb and first two fingers, while curling the other two fingers under for support, however it appears that Jon has his pointer finger through the handle. Now, according to Dorothea Johnson, this is also proper teacup and saucer etiquette.  However, I would like to point out, that people with larger hands, and fingers will find this hard to do at times when they encounter teacups with very small handle openings. Therefore, one should not attempt to place their finger through the tiny opening in a teacup handle, as it may get stuck, and that is not a very dainty situation I assure you.  Therefore, the "pinch" method is the safest one to use at all times, and I feel the most "correct" method over all.  As pictured, both gents are correctly holding their saucers balanced in their palms with their fingers fanned out underneath, and thumbs resting on the rims of their saucers to steady them.

The only slight thing I might correct, is that Jon (never missing a chance to be silly) seems to be holding his saucer up a little too close to his chin, while Stephan has his saucer at a better and more natural lower position - brilliant lads, well done!
Click HERE to go back to Teatime Etiquette