That Most Agreeable Ceremony - Afternoon Tea! 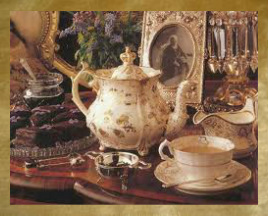 What's not to like about afternoon tea?  Beauty surrounds
and soothes the senses. I consider afternoon tea as being a mini-spa for the soul, it is a momentary escape from the hectic stresses in our live.  Just close your eyes and imagine gentile music floating among delicate scents of fragrant tea steeping in graceful tea pots, while mingling with the mouth watering aroma of freshly baked scones and tea cakes.  The sight of antique vases cradling fresh floral arrangements, and perfumed ladies dressed in their loveliest finery refresh computer screen weary eyes.  Tasty dainties elegantly stacked on sparkling, translucent fine bone china dishes, which are set upon lovely crisp linens and delicate lace, and bear the promise of epicurean delights.  The whispers of quiet conversation shared between friends and loved ones, sprinkled with dashes of merry laughter, and gentile manners are once again en vogue, it's just glorious!  Have you ever wondered how this enrapturing celebration of tranquility began? 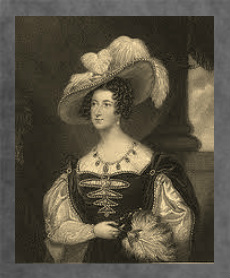 Here she is, Anna Russell, the 7th Duchess of Bedford, who is credited in many tea books, with originating the ritual we know as, afternoon tea.  I just love her hat, don't you?  As of late, I have actually discovered a controversy surrounding her.  Her status as the inventor of this delightful repast has been challenged by one Michael Coffey, The Tea Geek (how ironic,no?).  Historically speaking, she is some what of a mysterious figure, not much is really known about her other than she was an elder courtier of Queen Victoria, and her official title was Lady of the Bed Chamber, or a Lady-in-Waiting.  She was more of a friend, companion, and confidant than a literal servant to the Queen.  Therefore she carried a great deal of influence with the young sovereign, who she was assigned to serve, from 1841-1847.  Through careful study, those smarter and more dedicated than I, have found that many tea rituals and practices were carried out in courtly society long before the Duchess Anna's time.  So why do so many tea authoritarians give the Duchess the honor of being the sole inventor of the lovely pastime of afternoon tea?

What should be considered in answering this question is that while Anna may not have began the actual taking of tea in the afternoon per se; rather she was most likely responsible for its popularity and the certain way - her way - of taking afternoon tea.  Mr. Coffey coined the term, Bedford Orthodoxy, to describe the Duchess' version of afternoon tea.  I like it, Bedford Orthodoxy, and I think she would have liked it too.  It is said that she instructed her maids to bring her tea and some light snacks to her bedchamber to stave off what she called, that sinking feeling, she suffered between the hours of noon luncheon and the 8 o'clock supper time, which was observed by the aristocracy.  In other words, she was in dire need of an in-between-meal snack, and who can blame her?

But it wasn't just the little sandwiches, puddings (the English term for sweets) and tea that mattered, but how they were presented, served, and eaten was the matter in question for the Duchess.  The proper attire to wear, etiquette used, and conversation spoken, and the social rank of the invited guests were all factors in Anna's afternoon tea ritual, or the Bedford Orthodoxy, as well.  All of which, she would have naturally passed onto Her Majesty, Victoria, The Queen of England, as her influential Lady of the Bedchamber!  Queen Victoria had a very long reign indeed, and she has got to be England's most beloved Sovereign; and it is well known that Victoria loved her afternoon teas, no doubt thanks to Duchess Anna.  And since everyone knows that everyone wants to do what the royals do, afternoon tea time, and its rituals have been duplicated by the commoners for centuries. Most of the tea time etiquette rituals observed at tea time as we know it, stem from the Bedford Orthodoxy, which is a Victorian era invention, thanks to the good Duchess.  Therefore, any and all tea time etiquette I share with you, will be from that time, the time of its origin. However, I will make exceptions if the etiquette is no longer needed due to modern convenience or social acceptance.  For instance, we no longer pour hot tea from the cup into its saucer as a means of quickly cooling it before sipping.  Anyway, I wonder if the Duchess knew what a huge impact her Bedford Orthodoxy and influence on the Queen would have on society, then and now.  Never forget;  women reign supreme in the realm of influence!

These days however, like many a time honored tradition that falls by the wayside as times change, it appears the English don't seem to be too keen on having afternoon tea, not in the manner we Americans assume they do anyway.  Afternoon tea is no longer the formal affair performed at the 4 o'clock hour in the parlor in front of a crackling fire.  Instead a simple cuppa sipped from a mug in the kitchen, with or without a biscuit or bit of cake, is considered to be the norm these days. However, the formal tradition is observed, to a degree, in some households on special occasions, but if one wants the full English afternoon tea treatment, the local tea shops are the bastions that still keep this lovely tradition alive and well, and to the "tea", in England.  I wonder if the Duchess would be appalled by how we Americans have taken certain ....eh..... liberties with the orthodoxy she created, or if she would be amused. Well, I for one, am grateful to these English royal ladies for bringing us this simply elaborate meal! 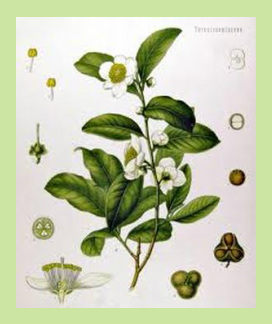 Since its legendary discovery by Chinese Emperor, Shen Nung, in 2737 B.C. , the camellia sinensis (sinensis means from China in Latin),
has been the subject of many a poet's and warrior's prose.  Its intoxicating liquor, is a definite source of much of the worlds' joy, agony, health, disease, prosperity, poverty, war and peace, throughout the centuries.  Why all this brewhaha over a shrub?  What is it about this amazing and beautiful plant that drove the desires of powerful men and women to boil over, and stain the pages of history with blood, just to possess its withered leaf?  It's remarkable to me how this innocent and attractive evergreen bush is the source of such a mysterious and dark brew, steeped in folklore and history, and is not surprisingly, one of this world's most consumed beverages: tea!  The camellia sinensis is the shrub of choice by most growers for tea production.  It must be due of its growth habit, which makes it best suitable for commercial production, and of course its flavor.  Even though there are many types of tea manufactured around the globe, they all come from one type of shrub-the camellia.

From Tea Garden to Tea Pot 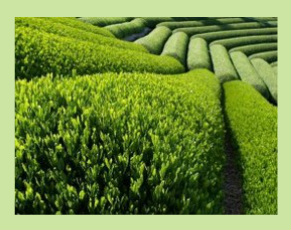 The process of bringing tea leaves from the garden to the tea pot is a little more complex than one might imagine.  There is a wonderful book, 'THE TEA COMPANION - A CONNOISSEUR'S GUIDE' by Jane Pettigrew, that gives a concise and very informative narrative on this subject.  I will share with you highlights of what I learned from its pages, and I highly recommend it as a good read if you wish to learn more about this very interesting and vast subject.

All the tea you see on the market, whether at your grocery store, at your favorite local tea shop, or online purveyor, comes from one of two types of camellia.  The camellia assamica, and sinensis.  Where as the japonica and sasanqua seem to be more valued for their flowers and oil harvested from their seeds, rather than their leaves for tea, but are all members of the theaceae, or tea family.

Tis true, every country on the face of God's green earth has been guilty of scandalous behavior; unfortunate occurrences they wish never happened, well, a least I hope so.  One such dubious happening, instigated by England toward China, over the trade of tea and other goods, is a prime example.  I will now attempt to over simplify this complicated trading affair.  Here I go....

The xenophobic Chinese didn't want anything that the domineering British had to trade, except silver.  And wouldn't you know it, England was on the gold standard, so to acquire the leaves they desired, they had to exchange gold for silver with an exchange fee tacked on, of course.  And as you can imagine, this got to be too expensive, so instead of drinking more coffee, they decided to traded Indian opium for Chinese tea.  Can you imagine?  A nation willfully selling a socially crippling narcotic to a foreign people, in trade for a commodity the same said drug dealing nation desperately wanted, only to find their desired commodity grew naturally in the very same foreign land they possessed - - where the vice was grown?  Talk about irony. Talk about egg on your face! To this day it is an embarrassing smudge against the nation of England upon the yellowing pages of its history.
Yes, dear reader, to put it succinctly,  the Britts enslaved the Chinese to Indian opium, because they were addicted to Chinese tea and other Chinese goods.  A sordid state of affairs we humans can create for ourselves and others due to the love of money, and the need to satisfy our lusts.  So now, in an effort to sanitize their faux pas against humanity, I understand that they refer to this debacle as the Anglo-Chinese Wars, instead of the more accurate and incriminating: Opium Wars.  But, it's like I said, no country is free from this sort of evil behavior.  Thankfully, a native assamica variety of camellia was discovered growing in the northern regions of India, in the upper Assam area in 1823.  Camellia assamica is considered to be a tree rather than a bush due to its stature, anywhere from 15-60 ft. tall depending on the variety   It took some time for Charles Bruce of the East Indian Trading Co. to convince his employers to make the switch.  Nowadays, the British seem to prefer the leaves of the Assamica variety far more than the Sinensis variety native to China, go figure!

All of these types and styles that tea comes in can also be flavored, or scented.  Flavors are added to tea leaves using highly concentrated extracts, or fruit and nut pieces.  Scented means that the tea leaves are mixed with flowers, like rose petals or jasmine blossoms while drying.  Some of my personal favorites of flavored teas are Earl Grey, and peach oolong.  My favorite scented tea is Rose Congou - it is like drinking a rose, just heavenly!  While that concept may not appeal to everyone, it may appeal to those who are wild about roses, like me!